Elena Engelsen (1952) lives and works in Oslo. Through her art she expresses a deep fascination for animals and nature, skilfully portraying the opportunities and challenges that nature offers. Engelsen masters, through her artistic expression, to reveal the individual personality of her subject animals, which differ as strongly as in humans. She achieves to depict vulnerability in animals, shows their fear, skepticism, and all the different expressions and characteristics that give them a distinct character. Engelsen immerses herself in the tradition of animalism. She lets the viewer recognize emotions and characteristics in her subjects. She sees the animal from all its angles and expresses a profound understanding of their anatomy and social patterns. Engelsen explores how it is to be an animal; how it is to have fur, feathers or a shell. What do we learn about our self when we meet an animal? Today there is a risk that up to one million species risk being eradicated. Engelsen makes the spectator question how it would feel to be threatened with extinction, and contemplate how little it takes to disturb and to destroy another's world and foundation of living.

Engelsen references to art-historic animalism, an art form that originated with a group of French artists in the late 1800s and early 1900s. The artist-group started a movement, which included Rembrandt Bugatti. Rembrandt Bugatti worked in the zoo in Antwerp, which allowed him to study animals and their behavior freely. Before animalism became a recognized expression, it was not considered acceptable to sculptor animals.

Elena Engelsen is educated at Steenhouwerij Buitenfeldert (in collaboration with Gerrit Rietveld Academy) in The Netherlands. During her stay in Amsterdam, she studied under Joop Boshardt, a fourth generation stonecutter, and sculptors Cor Kennedy and Kees Andriessen. When she returned to Norway in 1980, there were very few female Norwegian artists who worked in stone and had a ground-breaking knowledge of how to bring different qualities and expressions through diverse techniques that give the stone a variety of surfaces and structures. The artist shows understanding of the stone's existence and its various qualities. Her sculptures were quickly purchased by important Norwegian art institutions, such as The National Museum of Art, Museum of Contemporary Art, Norwegian Art Council and Oslo Municipality Art Collection, amongst many others. Her art is displayed in several public places; Amstelpark (Amsterdam, Netherlands), Oslo University Hospital, and Jernbanetorget (Oslo, Norway) to mention a few. She works in marble, limestone and petrified clay, as well as bronze. 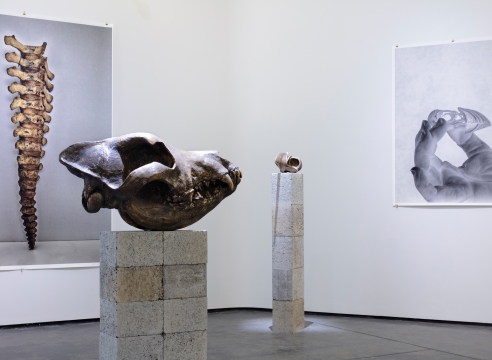