Ekeberg Sculpture park is located in Oslo, and is created as a unique and diverse heritage park for the enjoyment and enrichment for the city's population, and as an attraction for visitors. The park was a  gift to Oslo, from Christian Ringnes, in a generous guest to show love for the city where he grew up. It is developed in the mist of an outstanding woodland where history and nature constitute an exciting unit and which invites to an unforgettable experience. The park displays sculptures integrated into the nature, by artists such as  Marina Abramovic, Louise Bourgeois, Chapman Brothers, Lynn Chadwick, Tony Cragg, Salvador Dali  and James Turell amongst many other great names.

2013 was the 150 year anniversary of Edward Munch, a grand celebration in Norway. In this event Marina Abramovic created her own version of his famous painting “The Scream”, in the exact same spot in Ekeberg Sculpture Park where Munch was inspired to paint “The Scream”. The result was three interactive works of art; sculpture, performance and video works.

After an application and selection process Marina Abramovic invited 270  citizens of Oslo to scream, one by one, in this distinct place in Ekeberg Sculpture Park. The participants screamed out their feelings, with a surprising, intense and touching result. Abramovic states that “Nobody gets changed by somebody else's experience. What you experience will always stay with you, which is why I like to create a platform for interactions so people can experience something for themselves”.

The entire performance was documented on film, and was later created into a video work. Additionally a permanently installed sculpture in the shape of a frame is placed in the same location, as an interactive sculpture where visitors can scream out their emotions.

The park officially opened in September of 2013, while the Marina Abramovic sculpture and video was revealed in October of the same year. 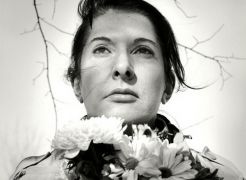